Hume City and Dandenong Thunder have played out one of the most action-packed 1-1 draws you’re likely to see, with both sides creating enough opportunities to win the game.

After a somewhat quiet start to the game, Dandenong opened the scoring in the 20th minute after Sammy Catherine got on the end of some great build-up play from the Thunder and made no mistake with his finish.

The goal appeared to be a wake-up call for Hume, and it was the home side who created the majority of the chances for the remainder of the half, finding themselves on-one-one with Fraser Maclaren in the Dandenong goal numerous times, but to no avail, as they saw all their opportunities go begging.

Hume continued to knock on the metaphorical door in the second half, and they thought the goal had finally come in the 71st minute when James Brown latched onto a Nick Hegarty cross and headed the ball past Maclaren; but City’s joy was cut short by the linesman’s flag as the goal was disallowed for offside.

On closer inspection, Brown appears to be onside, but the referee’s decision was final and Hume were still without a goal despite their dominance. 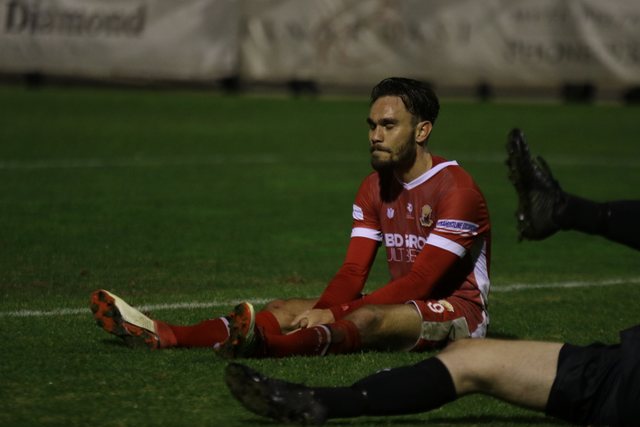 Hume’s frustration epitomised in a photo – photography by Bulent Yontem

The goal finally came in the 86th minute when Hegarty once again turned provider, this time playing in Benjamin Lydikos who slotted the ball past Maclaren and into the Thunder net.

The home crowd urged their side on to go and score a winning goal, but it was not meant to be as the Thunder held on for a point.

Dandenong drop one place to eighth, with South Melbourne three points behind but with two games in hand; while Hume remain as they were at the start of the game, levitating outside the relegation zone, one point ahead of Kingston City who face finals-challengers Melbourne Knights tomorrow afternoon.