HUME CITY GIRLS SET OUT TO MAKE A STANCE

HUME CITY GIRLS SET OUT TO MAKE A STANCE

For what has proven to be a tough start to the season for our girls, with being a first year team and coming together as one with a very short pre-season as well as battling various player injuries, the girls have been training hard since late February to learn the core skills, game training components and recently  have learnt playing in various formations and tactical systems of play.

On Sunday 16 May 2016 our Hume City Girls, coached by Bianca Celano, set out to play away at Capp Reserve in Preston against Darebin Falcons.  The girls arrived with positive attitudes and were fired up pre-game to achieve the results and prove to everyone that we want to win.

With very limited facilities available – no change-rooms or bathrooms, the girls remained positive and got each other motivated in the warmups.  The message was delivered loud and clear and we all knew that it was out day to shine and go out there and show the world how we play football.

The opposition scored against us early at the 22” however the girls maintained their heads high and continued to play to feet and communicate with one another on the field to win and get a counter goal asap.

The key in our first half was maintaining effective possession and to try and score goals as soon as possible.  With various attempts on targets and set pieces achieved, however all goals were saved by a terrific opposition goalkeeper until the 40” and the team achieved a fantastic counter attack through the midfield which was combination played to our attacking third and saw Mariam Al Saadi score.

The half-time scores remained a draw at 1-1.

The messages were clear at half time from the coach.  We have played a full half of effective possession based football, now let’s play attacking football with a strong backline in defence.  We had many attempts on target without success and the girls were told to continue to play and move the ball around more through the attacking third to help us succeed in goal conversion.

The girls went out on fire motivated to win this game.  Mia Bertola’s return from injury to the side created great enthusiasm and positive attitudes amongst the team and therefore we were able to hurt the opposition early at the 45” in the second half from a corner set piece and combination play which the girls had been training to achieve.  Mia had an amazing performance returning from injury and not only wanted to prove to herself that she was fit to play, but also achieved the results by scoring our second goal in the game.  The last 35 minutes of the game we attempted to continuously score without success, however we were able to also maintain the opposition from breaking down our defence and converting against us.

These results see our girls move from the bottom of the ladder into 9th position with only forwards and upwards movements as a squad moving forward. 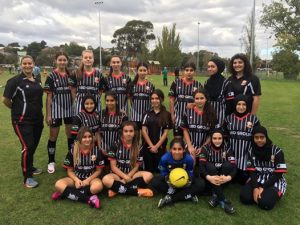 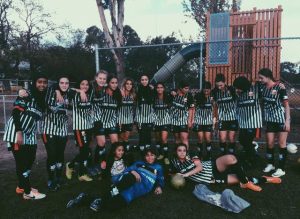 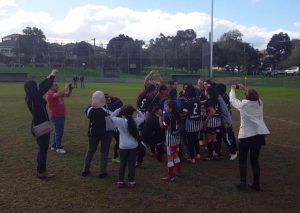 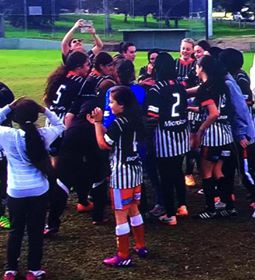