Hume City will look to build on its 3-0 victory over Richmond SC when it takes on Avondale FC on Friday night.

Avondale suffered a round 1 loss, when they were defeated 2-0 by Pascoe Vale. A second loss for the Anthony Barbieri led side will see it drift further towards the bottom of the table. Conversely for Hume City, a win will see it cement itself at the top of the table, where it currently sits second to South Melbourne on goal difference.

Avondale has strengthened considerably in the off-season, making a raft of new signings. Chris May will play his part between the sticks for Avondale after joining from Melbourne Knights in the off season. Nick Symeoy (Melbourne City Youth), Baki Efe (Melbourne City Youth) and Abraham Yango (Brisbane Roar Youth) have also signed on at Avondale, along with Spase Dilevski (ATM FA), Jem Berkant (Bentleigh Greens) and Yitay Towns (Northern Rangers). However, Hume City’s next opponents will be without centre back, Michele Crazia, who was sent off in their loss to Pascoe Vale last week.

Hernan Espindola impressed on debut in Hume City’s 3-0 win over Richmond SC, setting up Theo Markelis for Hume’s second goal and adding his own minutes later. The former Melbourne City man grew in confidence as the game went on, and if last weeks showing is anything to go by, expect to see more from the Argentine born midfielder.

Avondale have generously announced they are opening the gates for their first home game, with fans asked to give a gold coin donation to the SR13Appeal. Avondale’s own Matthew D’angelo will be shaving his dreadlocks at halftime to help raise money for the World’s Greatest Shave, after recently losing his Aunty to cancer. 1 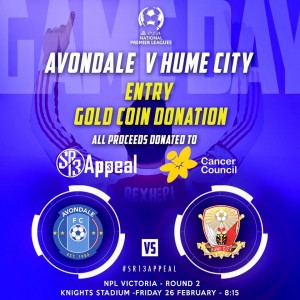 To donate to the World’s Greatest Shave click here – http://bit.ly/20PiWht